Water damaged buildings whether from a leak, penetrating damp or flooding will result in biological amplification.

Although mould will usually develop within 48 hours of a building being wet, bacteria is the first life form to multiply and as we know mould (penicillium) are natural enemies. Moulds and bacteria release various chemicals to defend their growth areas and the longer materials are wet the greater risk of increased human exposure from both levels (dose) and types of contaminates.

Typically mould will move through  three different phases of development, primary, secondary and tertiary growth. While all moulds are allergenic and may trigger asthma and various type 1 allergies, the tertiary slow growing moulds are more likely to develop into toxic moulds.  While these may be recognised as "Toxic Mould" they do not necessarily produce toxins unless under stress or threat from other moulds, bacteria, or fungicides, (bleach etc)

Apart from mould and bacteria many other contaminates are likely to be present in a damp or wet building and these can include chemicals released from wet building materials, dust and particulates , specifically the size which are inhalable to lower respiratory system and may be contaminated with toxins.

The WHO have stated that fragments of dead mould and bacteria may be up to 40 times more hazardous and harmful than active viable mould growth. (see WHO evidence)There are many reasons for this and Mould Busters will provide economic solutions.

Mould is everywhere on the planet and we are all exposed to mould on a daily basis.

The levels of normal mould spore exposure are called ambient and these are what would normally be counted as spores per cubic meter and these would usually be made up of different types or genus /species. Some types of mould found in water damaged or damp homes are not usually present at  detectable levels in ambient air, so when found in a home may point to possible health hazards.

There are over 100,000 types of mould but generally only 30 which have been identified as possible health hazards and these all grow in damp homes. Some moulds are recognised as toxic but toxic moulds do not always produce toxins. All moulds are allergenic and it is generally accepted that exposure to higher than average mould levels can cause or trigger asthma in susceptible people.

Susceptible people are considered to be the very young (under 11 who′s immune system has yet to develop or over 60 which is in decline. Also those on long term prescription drugs or chemotherapy or may even be genetically predisposed.

Exposure to mould can cause allergic reaction and sometimes when toxins are produced serious health consequences may follow.

Exposure is based on either quantity of spores in single events or chronic exposure of lower spore counts but over longer periods such as living and sleeping in mould contaminated homes.

Why is mould a health hazard?

Mould is the planets clean up system where it is always present and waiting to digest dead cellulose and organic materials. Our homes are made of these materials in the form of wall paper, plasterboard, furniture, clothing even dust which is often dead skin. Different moulds compete with each other and bacteria to grow and digest these dead materials. When challenged by other organisms or fungicides they may produce very potent toxins to fight off competitors.

When mould growth is attacked it can in some circumstances release a defence chemical called "mycotoxin These mycotoxins are amongst the most toxic substances known to man and are used as reference points against other poisons for lethality.

Medical products made from mould include "Statins antibiotics, and drugs to turn off the immune system typically prior and post  to transplant surgery and these same chemicals may be present in mould affected homes..

Mycotoxins are usually only released when specific moulds are under attack in situations such as competition with other moulds or bacteria, and of course drying out or killing mould with fungicide or bleach type products.

Dead mould can be a greater health threat than live spores because they sub micron fragments of dead spores can be covered in chemical mycotoxins for inhalation to deep or lower lung where blood oxygen transfer occurs and toxins can enter blood stream making even small amounts very harmful.

Trying to kill mould may cause the release of chemicals mycotoxins and no fungicide is likely to neutralise these chemicals.

Spores can grow in the lungs of susceptible people and the toxins released can be on surfaces or in the air on fragments of dead mould.

A table of mycotoxins and possible  health impact 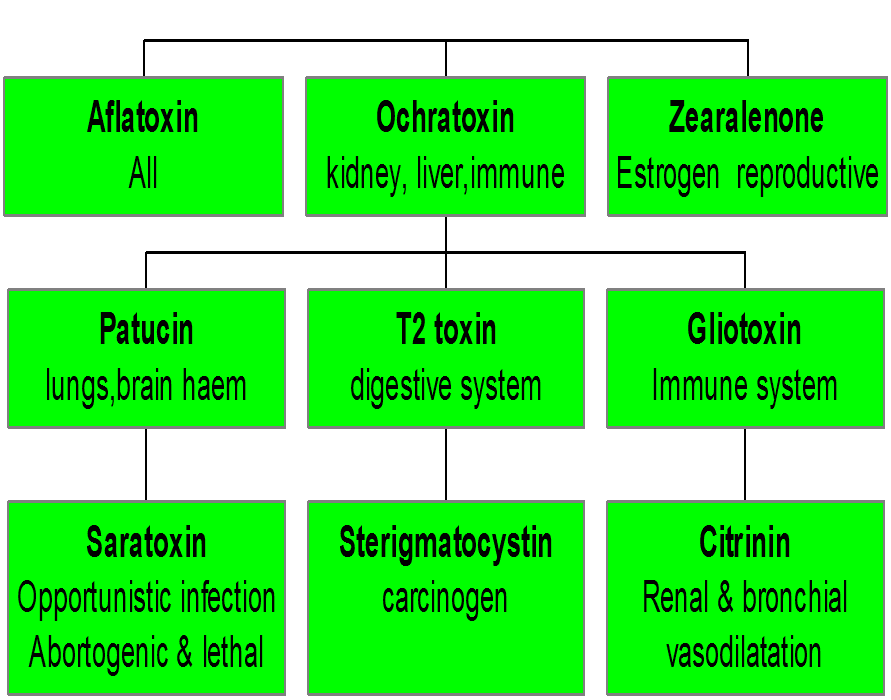 HEALTH HAZARDS
CONTACT US
MOULD REMOVAL
WHY YOU MAY NEED US
SITEMAP
Copyright 2017. All Rights Reserved | Web Design by Get Your Mobi